Regardless of the restrictions placed upon us in the UK by national speed limits, there is no denying that the vast majority of British motorists would jump at the chance to own a fast car. When I say fast car I am not just talking about anything which can travel above 100mph – which is almost all cars these days – I’m referring to sports cars with quick acceleration.

Unfortunately the reality is that only a very small number of us can afford high end sports cars, especially considering that they cost a fortune to run too. However, there are plenty of models cheaper than say a Lamborghini Aventador for example. Today I am going to highlight some affordable fast vehicles which you may or may not be aware of.

The Toyota GT86 is a sports coupe which has been in production since 2012. It is available with either a 6-speed manual or a 6-speed automatic transmission and costs around £25,000 – £30,000 to buy brand new. The GT86 is a lot of fun to drive thanks to sharp, responsive handling and also comes favourably equipped inside.

It has a top speed of 145mph and can accelerate from 0 – 62mph in less than 8 seconds. If you search hard enough online you can find used Toyota GT86 models for less than £20,000, which can certainly be classed as affordable considering some sports cars cost in excess of £100,000.

One of the world’s most recognisable sports cars, which has now been in production for 25 years, is the Mazda MX-5. This is largely down to the fact that its exterior shape and appearance has remained a constant since its debut in 1989. The vehicle has been produced in its third and current generation since 2005 and, like the GT86, can accelerate from 0 – 62mph in less than 8 seconds. The fastest version has a top speed of 130mph.

You won’t find a car for less money which is more fun to drive than the MX-5. It is comfortable inside but road noise can be rather a nuisance, especially on the motorway – you’ll need to turn up the stereo pretty loud!

Fuel economy is not as favourable as it is in some rivals, although used Mazda MX-5 models are available for less than £3,000 – now that is what I call affordable!

One of the MX-5s main rivals is the Porsche Boxster. The Boxster has been in production since 1996 and initially looked incredibly similar to its Japanese counterpart. The current generation however, which has been produced since 2012, looks a lot different to the original and more like a Lamborghini or Ferrari.

It is an excellent vehicle to drive, but if you want to buy a brand new one you’re looking at more than double the price that you’d pay for a new MX-5. That being said, if you search online you can find used Porsche Boxsters available for less than £5,000 – these won’t be the latest generation of course and may well have a fair few miles on the clock.

Moving a little higher up the price scale we have the Nissan GT-R. Now I’m not necessarily saying that the GT-R is an affordable fast car, because it certainly isn’t for most people; what it does offer though is the sort of acceleration and speed that you only see in supercars which cost hundreds of thousands of pounds. 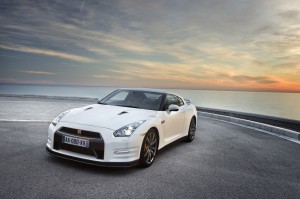 The GT-R can accelerate from 0 – 62mph in just 3 seconds and reach 193mph! Used Nissan GT-R models start from around £45,000, which may not seem like an “affordable” price, but when you compare it to the prices of its Italian rivals it is one of the greatest bargains in the automotive world in my opinion.